“People will come, Ray. They’ll come to Iowa for reasons they can’t even fathom. They’ll turn up your driveway not knowing for sure why they’re doing it….

Because, if you believe the impossible, the incredible can come true.”

That quote was from Field of Dreams, but it could have just as easily been talking about Sam Heughan’s My Peak Challenge. In 2016, its first year, MPC gained a whopping 3300+ members. And it seems as if for this year (2017), that number could double! 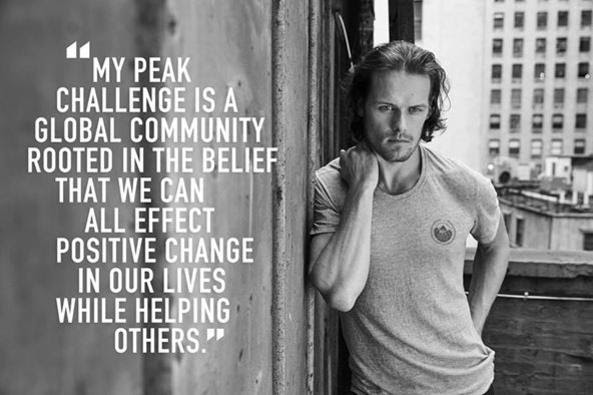 It’s pretty amazing to see the numbers rise, as last year some of us (okay, me) were initially skeptical of the whole darn thing. I even had the nerve to ask Jordana, the amazing “on-call” health guru and Facebook administrator (or Mama Jordana as she’s affectionately known), how many other people were actually participating. Because seriously, I was not joining up with just a couple of hundred people. I required social proof.

I was “sure” I knew what awaited me. A nice intro video, some exercise support and then wham – all alone, again, failing. Jordana was patient with me, when she could have blasted me for being so calculated in what is a significant charitable initiative.

MPC was originally advertised as a 60-day fitness and nutrition online tool, but it became evident early on that MPC was not going to be what we were promised.

It was so much better. The quality of the My Peak Challenge Program exceeded my expectations last year, and for 2017, they’ve promised even more.

A bond formed like no other, and if you think there’s anything like that in the Outlander-universe, well… I have yet to find it. Some of us climbed mountains, started running at 45 years of age, or entered 5km or 25km marathons. Others simply walked more and sat less. On top of the physical, some learned a new skill or honed their artistic craft, too. Some even tried to eat meatless for a month or one day per week. Whatever we tried, there was always support. And whenever we failed, there was equally as much support, if not more, to try again.

But even with all of the notable success of the program, I’ve been following the conversation on Twitter and in FB groups. Four common (and avoidable) excuses seem to be circulating for not becoming a Peaker:

1. Money. I can’t afford it. Well, no worries on that front because if you truly can’t afford the one-time $99 U.S. fee, there’s already a line up of people who want to become your “angel” to pay for your sign-up into the program (and a bonus t-shirt this year).

2. Not interested in a physical challenge. I don’t like exercising. The physical aspects of MPC are your choice. It’s a professional training program offered to you, if you choose to do it. But many Peakers have physical limitations, and only do what they can, or some only do creative challenges, such as painting, writing, knitting, etc… (I did a physical and a creative challenge.

3. Fear of failure. It never worked out for me before, and this time will be worse because I’ll fail in front of thousands. Most of us Peakers failed on the first, second, 40th try. Some succeeded at first, but then fell off. But you know what, we were ALL there to pick each other back up, to share our experiences of tears, frustration and resilience in the face of (sometimes tremendous) adversity. There is nothing better than being part of this supportive group.

4. You support local charities, only. Why would I raise funds for a charity in a different country when it won’t benefit anyone I know? All of the donations raised for 2016 went towards a Berkeley/Oxford University (US/UK) clinical trial, the results of which will impact cancer treatment globally.

Don’t get me wrong, fitness is not my whole life — I still am an Obsessenach — but I have achieved a healthy balance between my passion for my own life, and the passion I give to other people and things. This balance has provided me the opportunity to look around and enjoy life to its fullest.

For 2017, the program has expanded into a year-round offering! I can’t wait for it to get started, to reconnect with my 3,300 existing friends and meet MANY more new ones (including more men)! I’m also part of a local Peaker meet-up group, so I, like many others, enjoy local support as well.

I am glad that Sam Heughan continues to leverage his star-power to inspire thousands to achieve great things in their lives. To be us, only better. MPC experienced exponential benefits that I think were not anticipated by its creator. A real sense of global camaraderie developed between Peakers, as they supported one another through both successes and failures in a safe social environment, in achieving our personal goals, and also to positively influence the health of family and friends.

The Peakers who joined in 2016 became Bloodwise “ambassadors”, willing to raise even more money for cancer research to save lives. After the completion of the May challenge deadline, more ‘peaks’ have been summited and the excitement for the program was impalpable.

And now, as newly appointed President of Scotland Bloodwise, Heughan, whose Peakers raised more than $299,000 toward blood cancer research projects, helps to directly fund a clinical trial to treat acute myeloid leukaemia (AML), one of the most aggressive forms of blood cancer with resulting low survival rates.


Professor Paresh Vyas, who is leading the “Camellia” clinical trial has said, “We’re delighted that Sam has given his support to this clinical trial, which represents a hugely promising new way of tackling the disease and could transform the outlook for many patients.” Bloodwise CEO Cathy Gilman echoed that praise for Sam: “He has not only rallied his fans and [Peakers] to help raise money for the charity, but his global profile has increased awareness of blood cancer and the work we do to improve the lives of patients.”

MPC is truly a win-win for fans and for cancer research.
I stated previously that Sam’s humanitarianism will be his greatest legacy, and after experiencing firsthand what he’s created, I have no doubt whatsoever that this will hold true. Sam built it for us. Join today! The program begins today, Jan. 2, 2017, but can be started at any time, and any level.
Are you a Peaker? What are your hopes and goals for 2017?
Source: OCB
Outlander Cast Blog