Usually, Outlander shooting locations are a well-guarded secret. But, of late, it’s been hard to hide when scenes were recently shot along Edinburgh’s Royal Mile and in the well-traveled closes (or alleys) along the Capital City’s main drag. It is rare Outlander fans get wind of upcoming film sites. Therefore, it was somewhat surprising when Scotland’s Daily Record  newspaper announced several weeks ago that Outlander would be filming some Season 3 scenes along the Ayrshire coast of Scotland. Specifically, it mentioned that Dunure and Dunure Harbour would be used.

As we wait for filming to begin, we thought you might enjoy learning a bit about this tiny town and its equally tiny harbour. There is much fascinating history along this rocky outcrop overlooking the Firth of Clyde. Come along with us as we set the scene and get ready to see what Outlander has in store for this small hamlet…

As ruins go, the castle at Dunure is in fairly decent shape — especially when you consider the castle was estimated to have been originally built in the late 13th century. When my Scottish friends suggested we take a drive along the west coast last year during my visit to bonnie Scotland, I was oblivious to the presence, let alone significance, of the tiny village of Dunure and the castle bearing the same name. The Celtic name “Dunure” or “Donoure” is derived from the “hill” or “fort of the yew tree.” The castle literally juts off a rocky outcropping and dominates the landscape above the village. When I visited, we ventured down the single-track road and amazingly found one of only half a dozen parking spaces near the harbor. We walked along the beach towards the castle. It was thrilling to see the towers rising above the crashing waves below and even more fascinating to be allowed to climb and wander throughout the ruins. Despite its decrepit appearance, some portions of the castle have been reinforced and stairs and ladders have been added to make it partly accessible to visitors. But, it’s the early history of the castle and the neighboring harbour town that bring to mind visions of its tumultuous and bloody past. 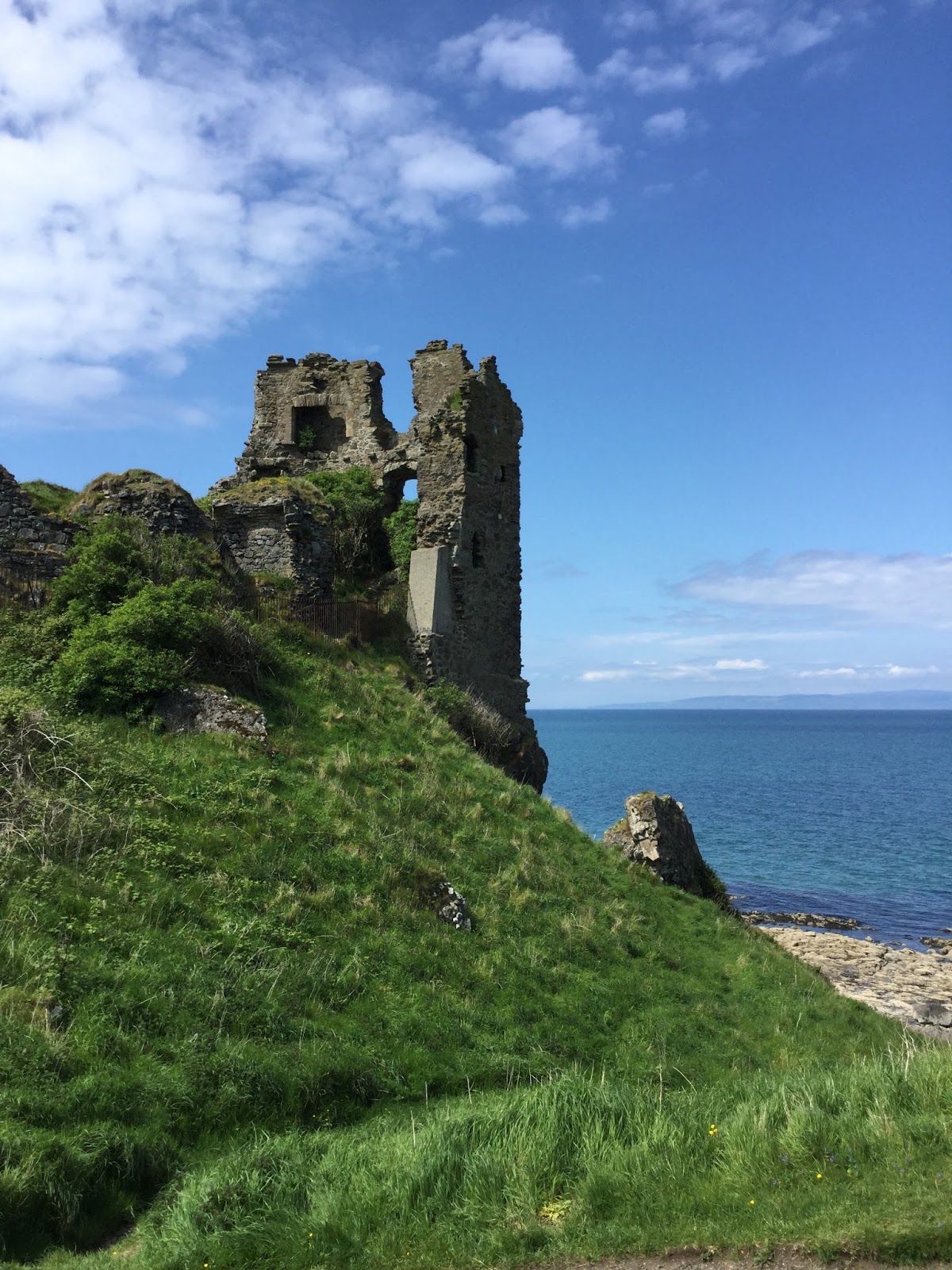 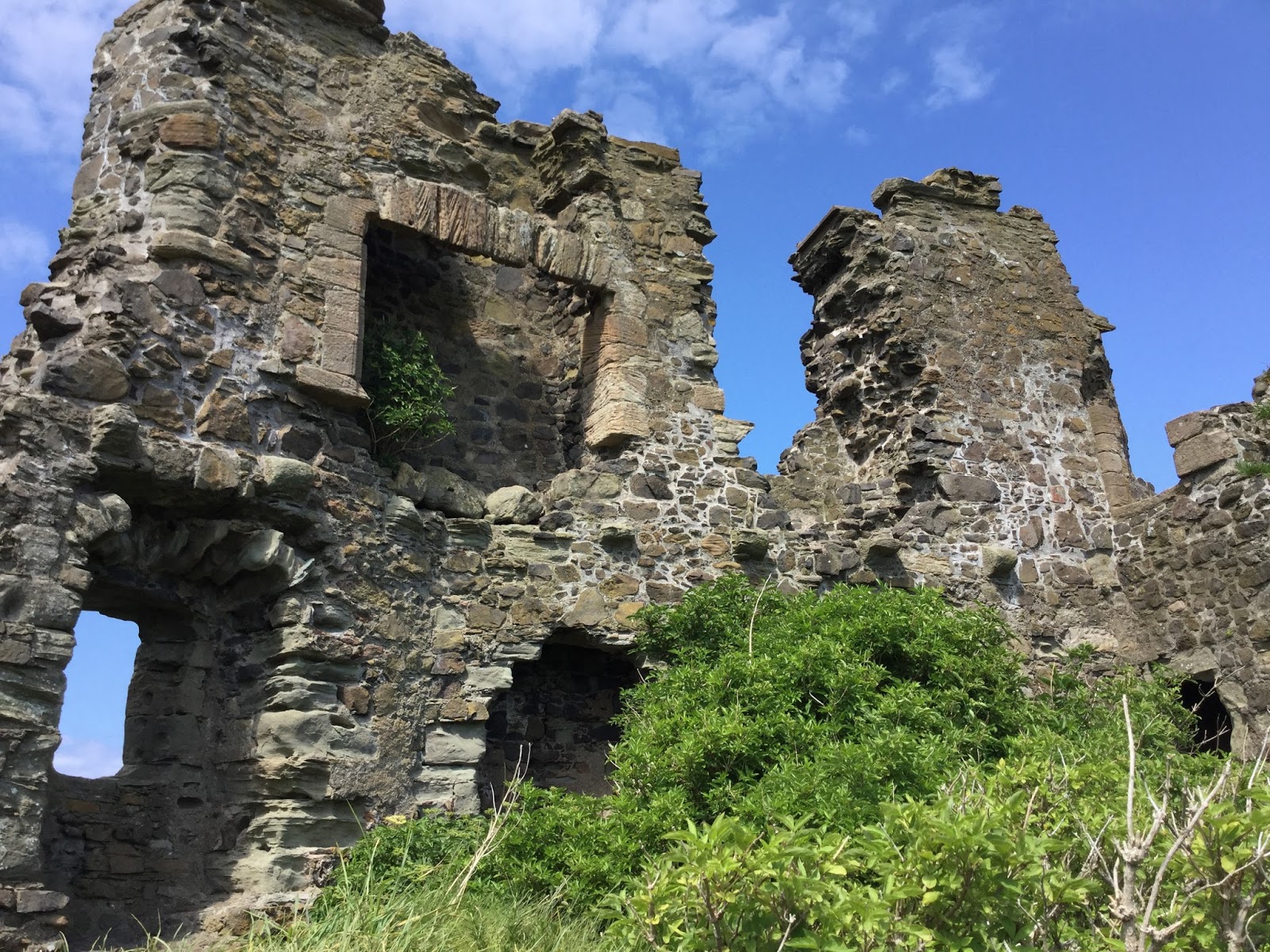 Photo by Anne Gavin
Several months ago, multiple production trailers and set dressers were seen milling about the castle grounds and nearby Kennedy Park. Local newspapers and sharp-eyed Outlander fans recognized the familiar red-coated actors of Outlander fame involved in filming at the castle and in boats surrounding the hilltop upon which the castle sits. Eagle eye fans spied actor David Berry, slated to portray beloved character, Lord John Grey, acting in a number of scenes filmed there. It’s unclear exactly which scenes from Season 3 were being filmed, but it’s evidence that Outlander production finds Dunure and Dunure Castle a hospitable place suited to their needs. The production’s desire to return this month then is understandable — whether that is to continue previously shot scenes or new, unrelated ones. 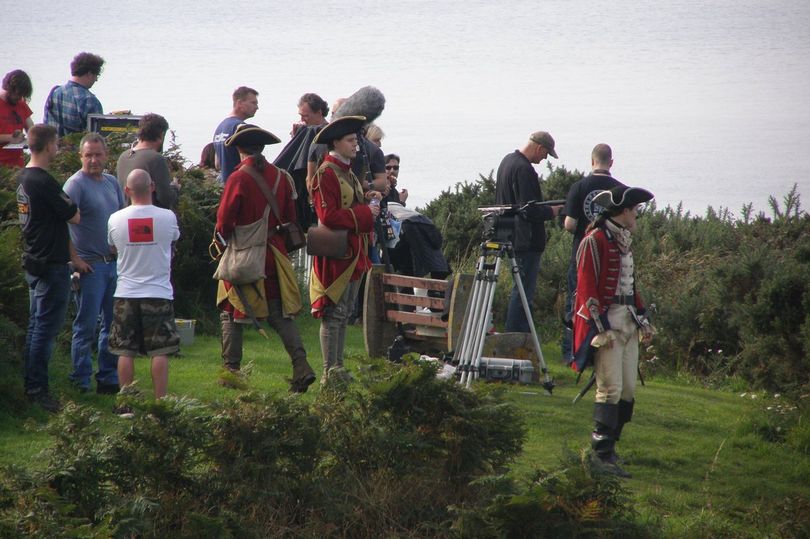 Courtesy Daily Record
As noted, the edifice of the castle itself is as majestic as the setting upon which it sits. The castle was the main fortress of the Kennedys of Carrick (a.k.a. the Earls of Cassilis) who ruled over much of southwest Scotland. The Kennedy family is much more closely associated with Culzean Castle, less than four miles down the coast, but for many centuries Dunure Castle was the more important of the two.
The Kennedy family prospered with several family members marrying into wealth and nobility while others becoming prominent church members — one becoming Bishop of St. Andrews. With their growing wealth, the family expanded the castle grounds adding a chapel, great hall, a prison and living accommodations. Sitting beside the castle is a unique building described as the doocot or dove cot. It’s a conical shaped stone building that houses over 200 nesting boxes and likely dates to the 15th century. It would have been an essential building for housing supplementary sources of food for the castle inhabitants, providing eggs and meat during the winter months. As mentioned, Dunure Castle is an open access site. However, you must be reasonably fit to climb the somewhat steep stairs and ladders and scamper across what is left of the castle’s stone walls. However, the views from atop the castle are spectacular and on a clear day you can easily see the shores of the Isle of Arran and the small mysterious Ailsa Craig island in the distance. 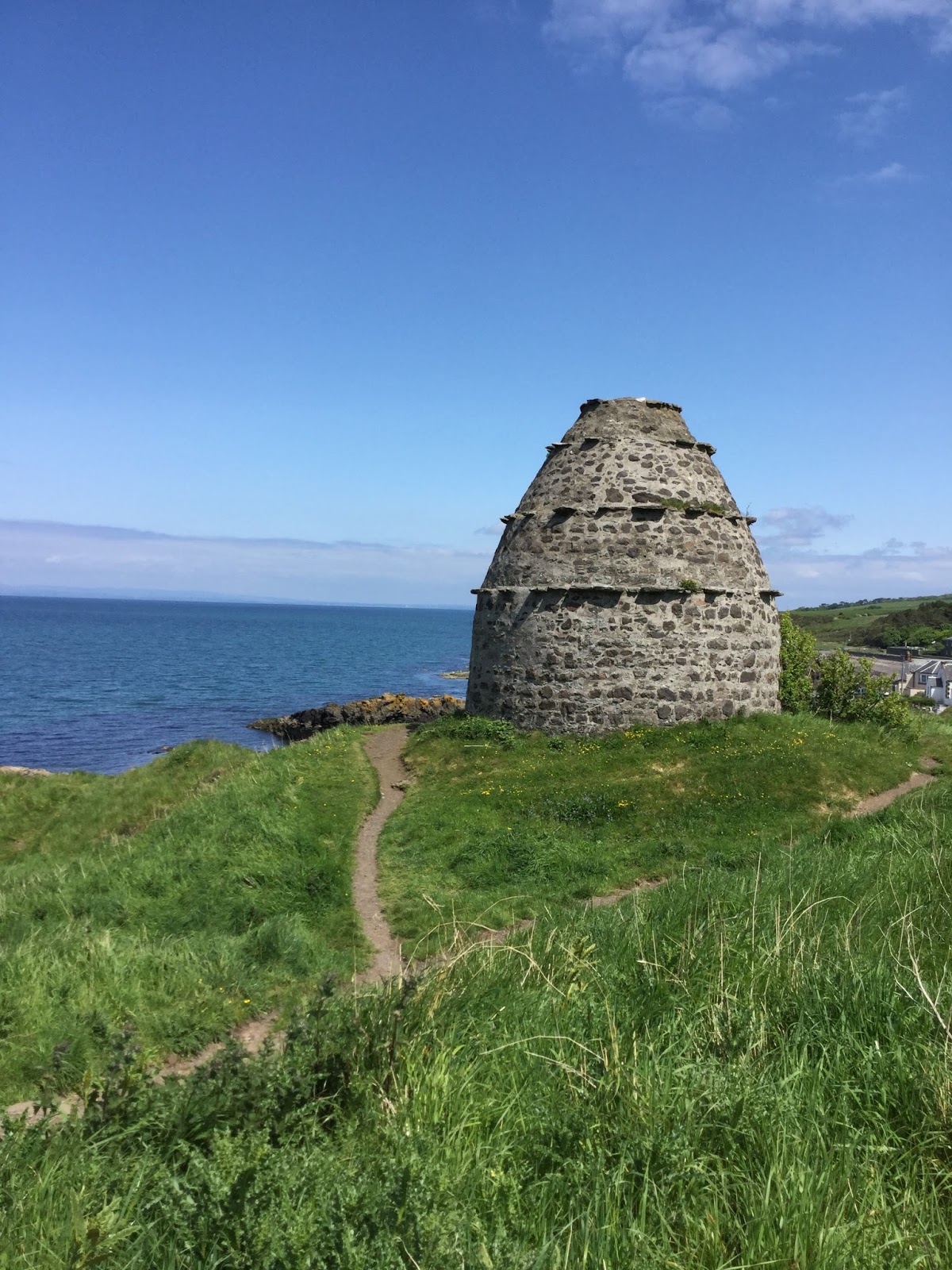 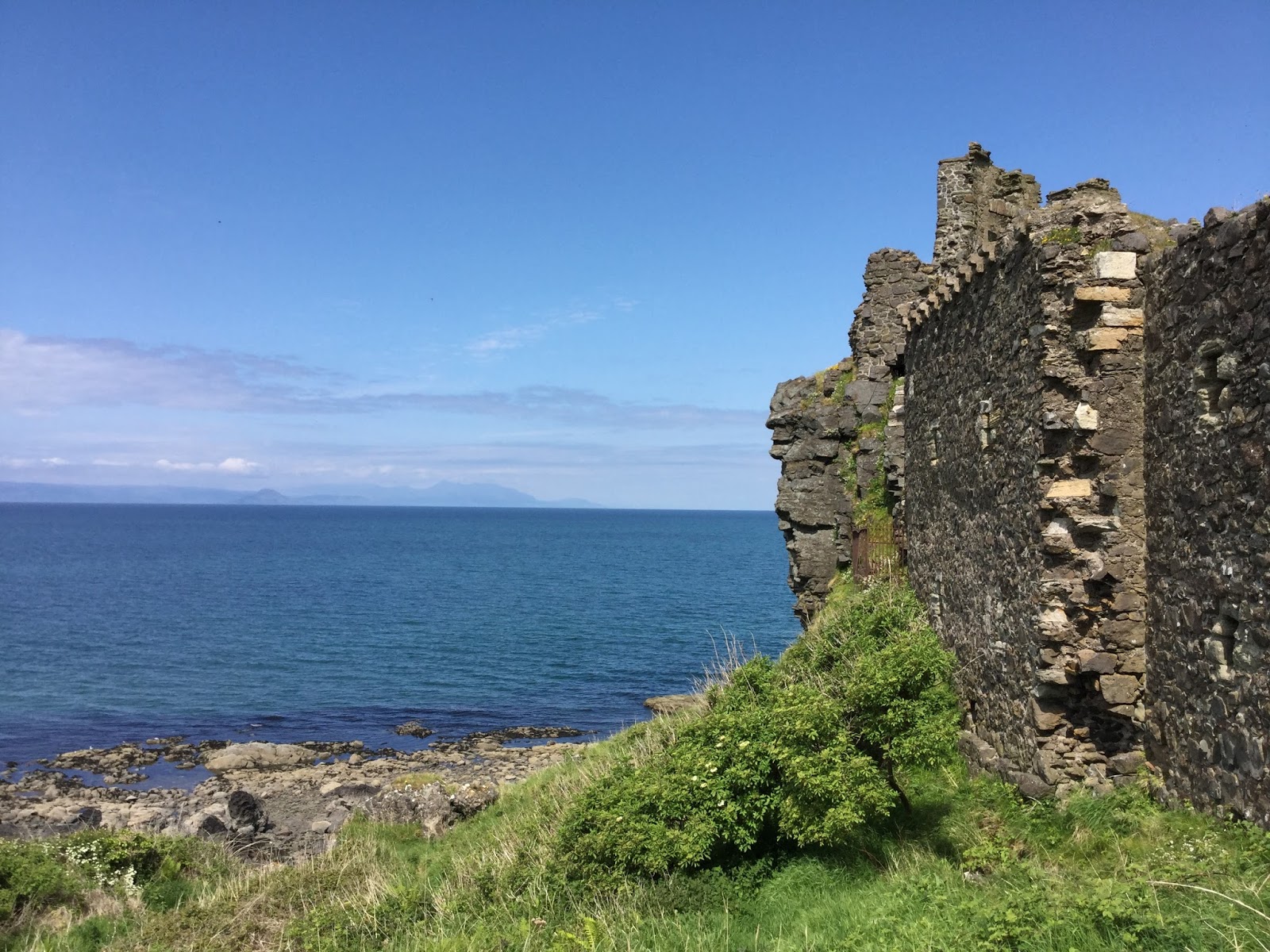 Photo by Anne Gavin
Among many footnotes in history, Dunure Castle was the site of a fateful meeting that took place in 1429 when a representative of King James I of Scotland met with John Mor MacDonald, representing the Lord of the Isles. The meeting did not go well and MacDonald was killed. In an effort to contain the outrage, King James ordered his representative to be killed as punishment. However, this did not prevent a subsequent uprising by the Isles.
Also, not surprisingly, since the lady seemingly got around, Mary Queen of Scots spent three days in residence at Dunure Castle during one of her walk-abouts throughout her short reign. Thus, Dunure Castle joins a long list of locations in Scotland to display a “Mary slept here” plaque!
But, perhaps the most famous dispute at Dunure Castle arose between Gilbert Kennedy, the Fourth Earl of Cassilis, and Alan Stewart, the administrator of nearby Crossraguel Abbey. With the arrival of the Reformation in Scotland in the mid-1500s, it seems that Gilbert Kennedy and other secular land-owners became quite obsessed with a land-grab of nearby properties held by religious orders. The Fourth Earl successfully gained control of the lands of Glenluce Abbey in Galloway but not after paying a monk associated with the Abbey to forge signatures on a charter to cede the lands to Kennedy. Kennedy later had the monk killed. Kennedy then set his sights on the Abbey at Crossraguel, which did not come quite as easily. 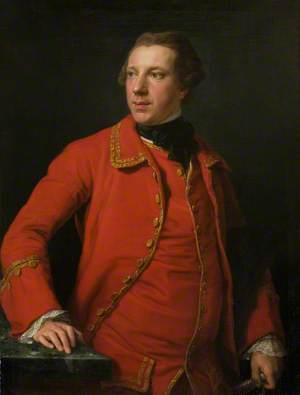 Gilbert Kennedy, Fourth Earl of Cassilis
The Earl used traditional medieval Scottish “diplomacy” to persuade Mr. Stewart, the administrator at Crossraguel, to consign his lands to the Kennedy Clan by roasting him alive in a dungeon of Dunure Castle. If you visit the Castle today, you can walk inside that dark dungeon and see where Alan Stewart suffered that cruel act of persuasion. It was said that Stewart signed the charter ceding the lands after two turns on the spit. Ouch! This incident was heretofore known as the “Roasting of the Abbot.” The episode, however, set off a chain of events that led to a civil war between Kennedy cousins and multiple assaults upon the castle causing considerable damage to the main castle and surrounding buildings. The Castle had outlived its days as a military fortress by the 1700s and gradually fell into decay. Remarkably, Kennedy descendants have retained ownership of Castle Dunure to this day. 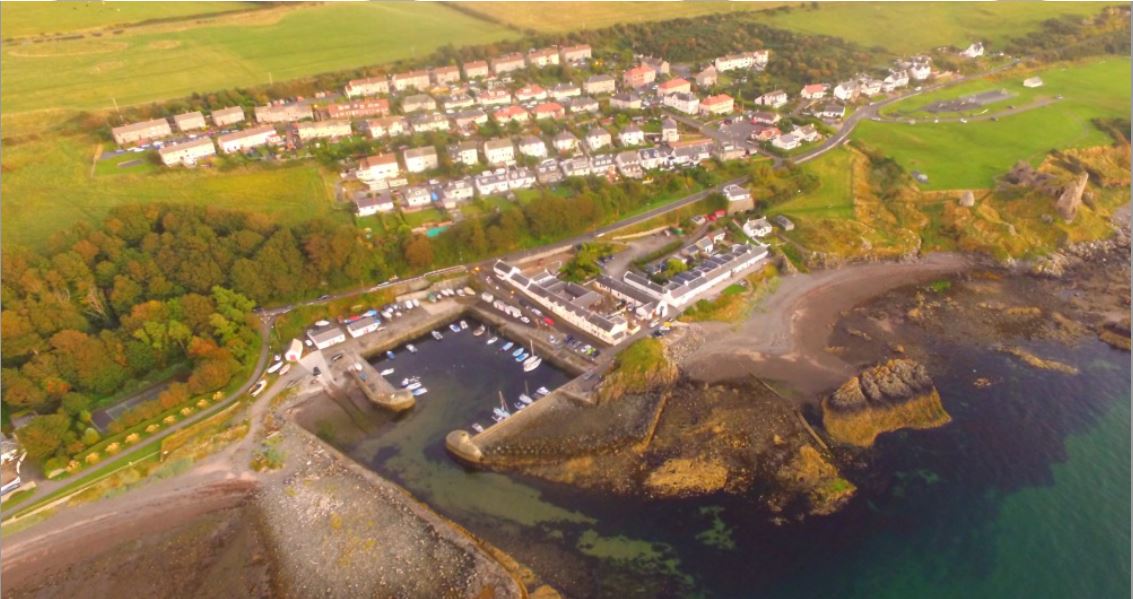 The village and Harbour of Dunure lies just to the north of the castle — a short walk up the beach. While it’s likely some sort of settlement existed during the hay day of Dunure Castle, most of what can be seen today along the harbour and neighboring village was established in the early 19th century shortly after improvements were made to the local harbour. The harbour is a square basin with a breakwater and topped off by a striking cylindrical stone lighthouse at the harbour’s entrance from the Clyde of Firth. The Kennedy family made improvements to the harbour to the tune of 50,000 pounds to make it more attractive for fishing. The depth at the harbour is only 12 feet but can be artificially increased to up to 30 feet. As recently as the 1960s, Dunure Harbour was the home base for fishing vessels of up to 50 feet in length. But, as fishing vessels became larger and demanded a deeper depth of water, the fishing fleet declined substantially. In modern day, the harbour is now home to an active leisure fleet and smaller fishing boats. 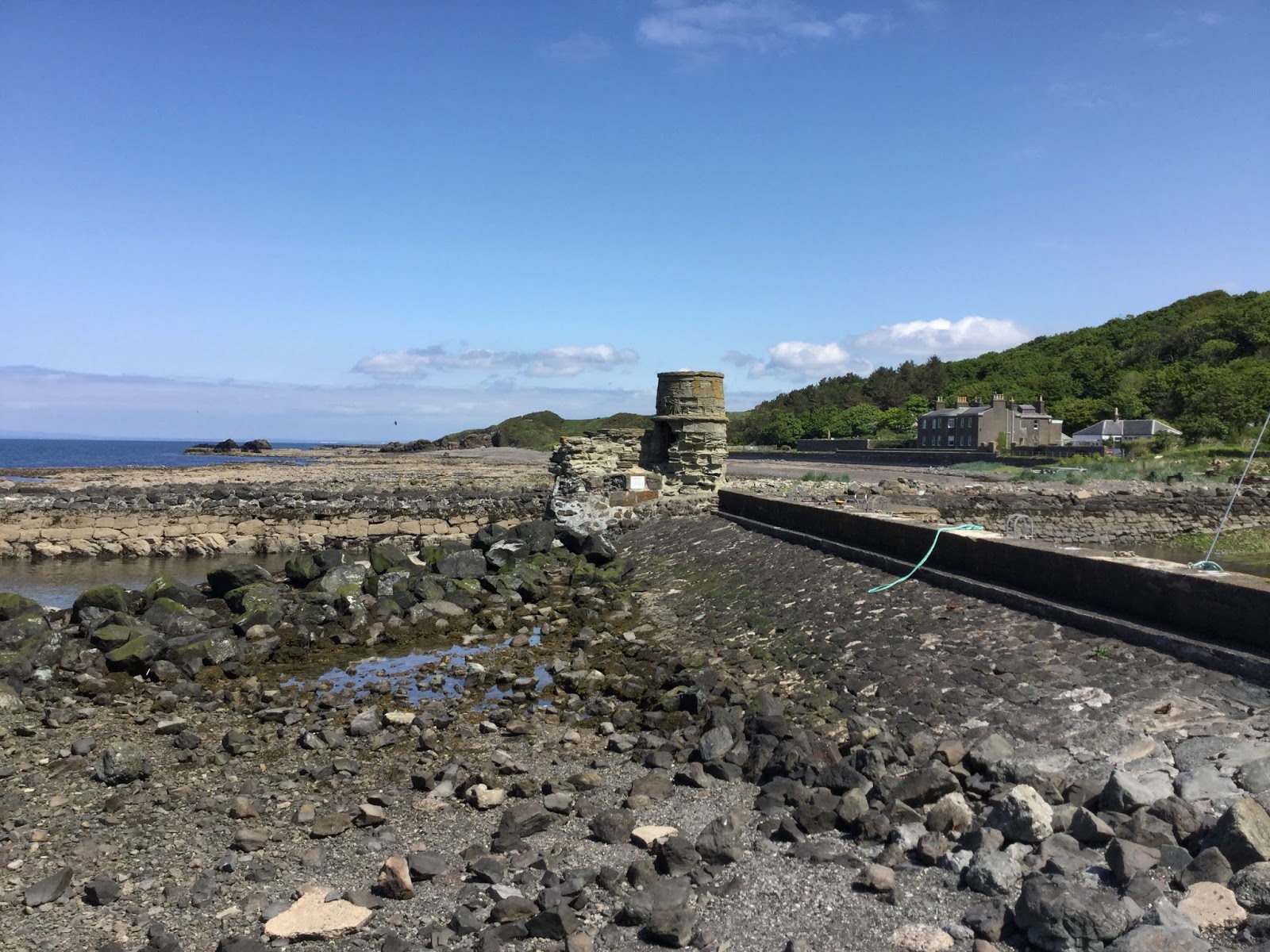 Photo by Anne Gavin
Charles Rennie Mackintosh, celebrated Scottish architect, designer, and artist was known to rent a cottage in Dunure during the summer months. Mackintosh and his famous friends known as the “The Immortals” would holiday frequently in Dunure often bringing talented students from the Glasgow School of Art together to collaborate on what would become known as the “Glasgow Style.” Mackintosh’s most famous architectural work was his design for The Glasgow School of Art. The building was radically modern but practical, functional, and artistic. Its simplistic aesthetic became a model for many future architectural designs. There is a plaque on the side of a building adjacent to the Dunure Harbour marking Mackintosh’s frequent presence and that of “The Immortals.”

The harbour is where we see the latest evidence of Outlander goings-on. An entire side of the harbour quay has been dressed as an 18th century fishing village. Speculation is that this may serve as filming site for the days preceding Jamie and Claire’s voyage to the Caribbean. It is truly amazing the details of some of the set dressing. Locals and Outlander fans around the world are eagerly anticipating the arrival of the show’s now famous cast. Outlander will soon descend on this small village once again to begin shooting some of the final Scotland-based scenes of Season 3. 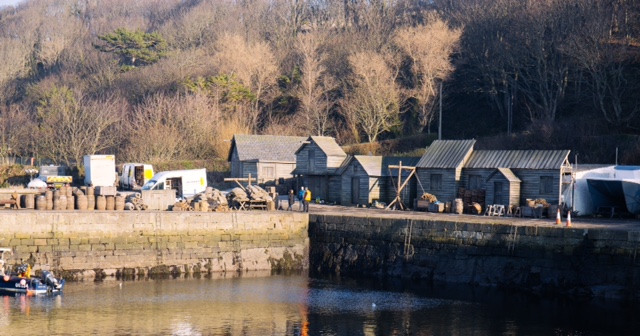 Photo courtesy of Peter Clark
Rumors have shooting set to commence on or around the 30th of January. The good news is that the Outlander Cast Blog will have a Special Correspondent reporting from Dunure about all the excitement surrounding the Outlander film sets! Written by the fans, for the fans, we hope to bring you some revelations from the set and maybe a photo or two. Stay tuned but in the meantime, consider making a trip to Dunure when next in bonnie Scotland. It’s a wee day trip from Glasgow and surrounded by some other wonderful historic sites and nearby castles in addition to what you’ll find in Dunure. And, perhaps, you’ll even walk where the stars of Outlander did during the making of Season 3!
What scenes do you think they will film in Dunure Harbour?  Have you ever traveled to Scotland’s west coast?  If so, tell us about it!
Source: OCB
Outlander Cast Blog