The Falcon And The Winter Soldier: Episode 1.01 “New World Order” | This Old World Is A New World

The Falcon And The Winter Soldier: 1.01 New World Order is certainly more conventionally Marvel than WandaVision, but it also reminds us that convention is what defines an old world struggling to become a new world.

It is only inevitable that The Falcon And The Winter Soldier draw comparisons to Marvel’s first event television show, WandaVision. Even though it was supposed to premiere before WandaVision — and you can certainly tell given the coda to Captain America in the cold open — I’m not completely sure that those comparisons are either fair or warranted.  WandaVision felt purposely weird, but in a way that best served the characters. TFTWS feels purposely MCU, but in a way that best serves it’s characters.

Irrespective of their style, both shows feature an important commonality – how do the characters move forward? For Wanda, it was confronting her grief. For Sam and Bucky, their journeys begin and end with the discovery of their purpose. But in order to start this journey forward, it begins with echoing the past.

Sam needs to find his role in the world now that he has returned from “The Blip” and helped save the universe from Thanos.  Can Sam play in both avenues of being the dutiful “Uncle Sam” and the high flying Falcon? Bucky, however, needs to secure his spot in a functioning society now that he is no longer The Winter Soldier and there are no more wars to be fought after also helping to defeat Ol’ Purple Chin. Oddly enough, though, TFTWS places significant emphasis on the past in multiple ways; most primarily on measuring these two characters against their best friend, Steve Rogers.

Captain America’s absence looms large over the proceedings of “New World Order” – particularly on the affect he has on both Sam and Bucky. It’s no coincidence that the episode’s cold open begins with Sam preparing a suit by ironing out the wrinkles while the Captain America shield waits in the old leather bag once given to Sam by old Steve Rogers in Avengers: Endgame. It’s a visual representation of Sam’s current state of mind – he’s ironing out the details of his life while preparing to maintain the veneer of the more mortal Sam Wilson/The Falcon.

Consider also that the first bit of dialogue is taken from Endgame when Steve asks Sam, “How does it feel?” and Sam timidly replies, “it feels like someone else’s.”  As an audience, we are immediately presented with the notion that Sam has rejected Steve’s literal passing of the Captain America shield, and that Sam’s arc will consist of his being “worthy” or finding “acceptance” that the shield is, in fact, his. The arc is further cemented by the surprisingly poignant conversation shared between Sam and Rhodey (hey surprise Don Cheadle cameo!) as they discussed the state of the world while they traverse the literal relics that make up what the public perceives to be the foundational aspects of “Captain America”.

But I’m also positive that this series will help redefine what Steve already knew, and what Sam is destined to ascertain: “Captain America” isn’t a shield, or an outfit. Rather, it’s an ideal. Don’t be surprised to hear Sam utter the phrase, “I can do this all day” at least once by the end of the series.

His therapist may think it’s “utter bullshit” that Bucky wants to find peace in this foreign world, but there is truth to his battle when he’s trying to discover what it means to be “Bucky” now that he’s no longer The Winter Soldier, he doesn’t have his friend Steve, and there no more wars to be fought.

Note the incredible direction of this scene – Bucky framed by the painting of the woods in the background, and the extreme closeups on the faces. Bucky is still lost in the proverbial woods but his therapist is trying to make him confront his past so he can redefine his future. Unlike many instances Bucky shies away from people who surround him in life an relationships, the extreme closeups are a visual cue that Bucky cannot hide. The angles are canted, off kilter even, lending to the emotional fragility and uncertainty facing Bucky. He cannot escape his past, and he cannot move forward either.

After taking solace and finding definition in war, what does one do once they have proven themselves victorious in the biggest battle of them all? It’s not accident that Bucky found the most comfort in Wakanda – a place where he was unencumbered by his nightmare of The Winter Soldier, or the need to fight.

Bucky is a man from another time and much is made about his specific age of being 106. Yes, it’s played as a joke, but he simply doesn’t understand his place in the world and he uses Takashima as a way of maintaining himself in his own reality. He may not be “The Winter Soldier” anymore, but his deeds are still his and those nightmares he endures of killing Takashima’s son are the only aspect of his life grounding him in reality.

While I’m disappointed Sam and Bucky don’t have any scenes together, there is a necessity to paint a picture of both these characters living the separate lives and giving them breathing room to understand their proper motivations. It’s even essential to see that Bucky has been avoiding people and even his connection — albeit playfully antagonistic in nature — to Sam via ignored text messages.

By juxtaposing their mundane lives — going to therapy, crossing names off the amends list, trying to get loans at a bank, and trying to uphold the family business — against their “superhero” lives, there is a clearer sense of these who these people are outside of their highly publicized life as Avengers.

As a benefit of this format, TFTWS can explore these very specific characteristics of our heroes that the larger MCU films simply don’t have narrative bandwith to navigate. But, at the same time, the show can also reference the DNA of it’s cinematic predecessors in an organic fashion while remaining true to it’s character centric nature.

The “New World Order” references Captain America: Winter Soldier in many ways, whether it is Sam’s nearly identical jump off the plane when compared to Steve’s same jump in The Winter Soldier,

Or, bringing back Georges Batroc,  AKA: The Leaper, (who originally appeared Winter Soldier) as the villain who attempts to steal the American military attache. 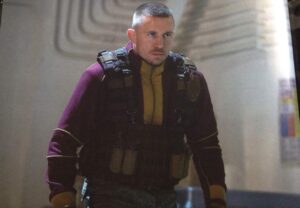 How about when we first meet Bucky in TFTWS as The Winter Soldier — killing a bunch of log carriers in the hotel?

There’s even a rhyming for when we first met Bucky in Captain America: The First Avenger, and in TFTWS, as both highlight Bucky jumping in to stop an alleyway fight in Brooklyn.

Both instances — the alleyway rescue, and the nightmare, are meant to evoke both of Bucky’s past lives and how they are the respective thesis and antithesis of Bucky’s existence. As such, Bucky’s story in TFTWS will center around his journey to unite his thesis and antithesis into a newly formed synthesis. That synthesis, in whatever form it may take, will come from the answer in what it means to be Bucky Barnes when there is no Steve, no Winter Soldier, and no more battles.

Steve Rogers’ absence, though, doesn’t loom large over only just Sam and Bucky. TFTWS utilizes it’s past film DNA to comment on our main character’s current state of mind, but it also acknowledges an absence “Captain America’s” role in society as well. As much as Bucky and Sam’s journey is about how to move forward, the government’s answer to find stability is to revert back to a simpler time when Captain America was around to help keep the world in check. So, they simply crown a new Captain America.

Now, there is a whole commentary that can be explored about the government’s choice here: why did they not let Sam keep the shield? Why didn’t they propose Steve’s choice of Sam as the new Captain America? Why did they keep the process hidden from Sam, and is it purposeful that their new choice is a white man instead of a black man? Add this to the notion that Sam and his sister cannot obtain an SBA loan because restrictions “have tightened” since The Blip, and there’s some pretty serious grounds for racial discrimination being at play here. Being a middle class 38 year old white male, I won’t get on my soap box and same that I’m right in this assessment, but I will say that if this is what showrunner Malcolm Spellman is trying to accomplish, he is doing it and it is being done in an excellent manner. 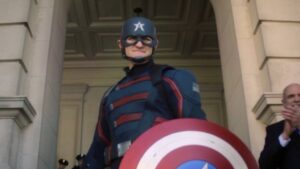 The pointed racial commentary is told in an effective manner, but naming a “new Captain America” in the style of a psuedo-cliffhanger also comments on Sam and Bucky’s respective journeys in this show. Now that there is a new “Captain America”, how do Sam and Bucky respond? Because of their specific ties to Steve, what does this appointment say about them and their role in society? Is it also a coincidence that there is a brand new “anti-patriotic” group called the Flag Smashers that is introduced at the same time as a brand new Captain America.

Fans of the comics know that this new Captain America is actually a character named John Walker who has similar capabilities to Steve. Those powers were given to him by a character named Power Broker, and he is not a good dude. In fact, in the comics, Walker’s very much a supervillain and I wonder if the guy who broke Torres’ orbital bone was given the same powers by Power Broker — that is all I am going to say in fear of major spoilers.

Judging this episode on it’s own is a very hard task because it is clearly just the first chapter of a much larger story. Being on Disney+ and having the benefit of taking place in the MCU affords TFTWS the opportunity to not play by the original broadcast rules of a normal pilot. As such, there is no traditional occurrence of events where X happens so our protagonist must do Y to change. There is a definition of mundanity juxtaposed against excitement in their lives, but there is no inciting incident that necessarily starts our story.

Unless, of course, naming the new Captain America is the inciting incident and our characters must choose how they are going to act going forward.

Again, it’s no coincidence that this episode begins with Steve passing the mantle of Captain America to Sam, only for Sam to later reject it and then the episode concludes with John Walker being named Captain America by the American government. Our story begins and ends with Captain America, and everything in between is the definition of our main characters acceptance of the roles in their world. The problem with both Sam and Bucky is that there stasis is not good for either of them.  They cannot maintain their current lives and they will need each other to unearth what their new roles will be inside the New World Order.

Apropos of nothing for The Falcon And The Winter Soldier: 1.01 New World Order

The Falcon And The Winter Soldier: 1.01 New World Order