The day I met Diana Gabaldon, the woman who gifted us Outlander

When friends posted on Facebook that Diana Gabaldon would be speaking and signing books at the Entertainment Weekly PopFest in Los Angeles, I didn’t hesitate for a minute to whip out my credit card and pay for a VIP ticket.   In fact, my credit card may have left a skid mark on the leather of my purse, if not a trail of smoke.  Why the enthusiasm to part with money?  The same reason I went all the way to Scotland from San Diego last May to go on an Outlander tour in the Highlands – Diana Gabaldon, of course!

Diana Gabaldon, through her skillfully written and beautifully orchestrated series of Outlander books has led me to a love for Scotland and its rich history, its beautiful landscapes and a connection with my own ancestry.  The joy of reading and living inside the lives of Jamie and Claire is uplifting and reminds me to embrace my own husband, children and life.  I have also made new friendships from a common love and interest in all that is Outlander.  Important side note: I also have no complaints about having a television portrayal of all this magic before my eyes – drool, sigh, hope, wait, drool, cheer, oh yeah!

So on to the EW PopFest in Los Angeles…

I forged ahead with no expectations other than knowing I would be meeting up with two friends, Kim and Uluwehi, who I had met on the Outlander Tour last May. I knew fun and laughs were in store. 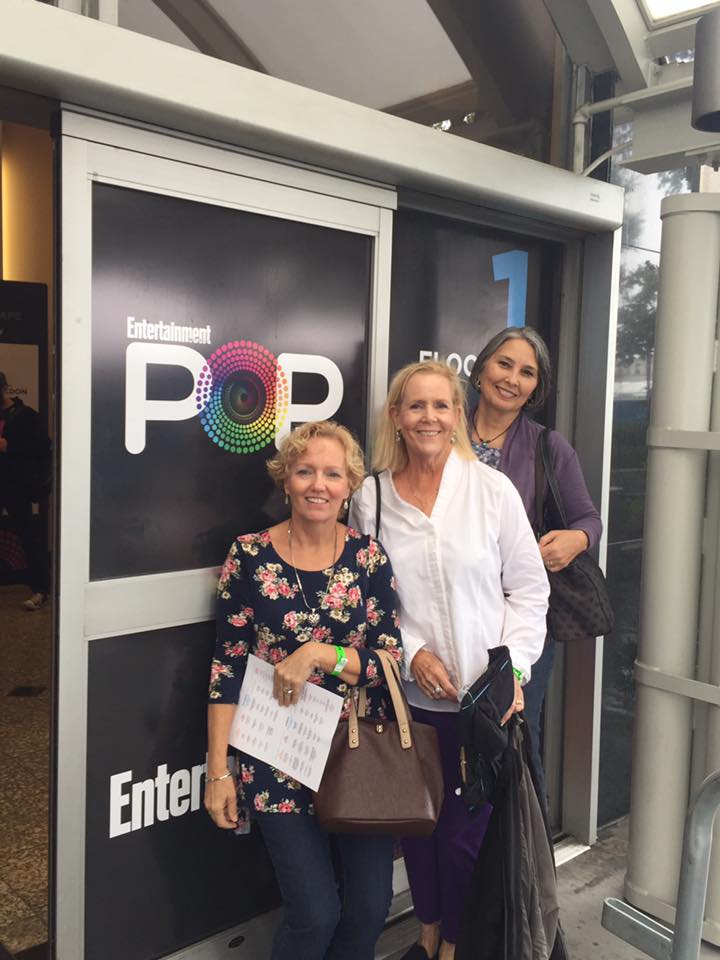 The three of us arrived at the PopFest, excited and ready for the day!  Within the first few minutes of trying to figure out where to line up to get into the theatre to see Diana, we hooked up with a take-charge fan of Diana’s who didn’t hesitate to get to the bottom of things.  She confronted different staff at the event and assertively found us a spot at the front of the VIP line to wait to be let in to the theatre.  We owe her more than a thank you for taking us under her wing because she got us great seats in the front that faced Diana as she answered questions, and later she saved us a spot in line at the book signing.  More on that hilarity, later!
As we waited for Diana, Lynette Rice, the panel moderator from Entertainment Weekly, came out and we could see Diana standing backstage waiting to be announced.  Diana looked directly at Kim, Uluwehi and me and gave us a little smile and wave of acknowledgment.  It was thrilling to make a connection with Diana and we gave her a smile and a wave back, practically patting each other on the back for our success in becoming part of Diana’s world for a moment. 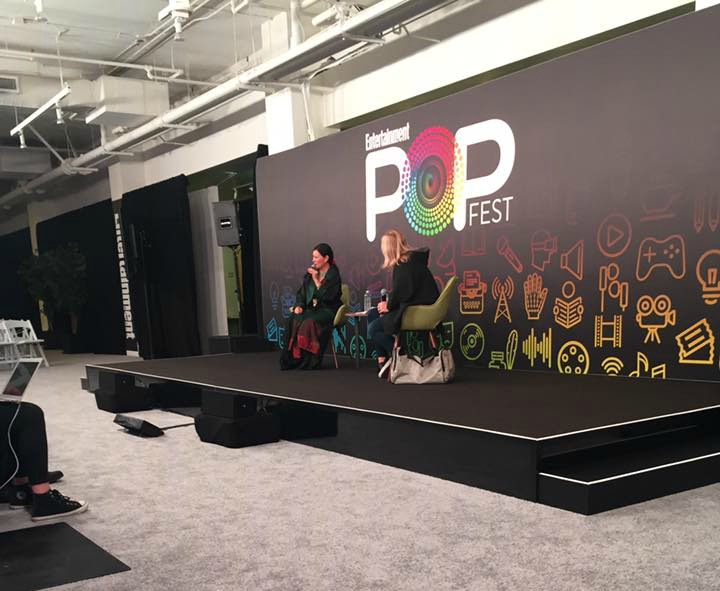 Once Diana came on stage, it was perfect, the theatre was small enough that it felt real.  Diana was real.  She wore a unique silk robe style outfit over pants, which I am sure has an interesting tale behind its purchase.  She looked great, as always, and was immediately gracious and elegant.   Lynette Rice and some audience members asked the typical questions that most Outlander fans already knew the answers to from the internet.  No surprises there. Since this was Diana and she wasn’t doing a press event with the cast of the Outlander TV series on Starz, most of the discussion was around Diana and her writing of the novels.  It was definitely about the books, her appreciation of her fans, and the audience was filled with book readers – not just television fans of the story.  I got the impression that Diana clearly sees her novels as what she does and the Starz Television series as Ron Moore’s gig that she supports wholeheartedly.
During the 45 minutes that Diana answered questions, she mentioned a couple things that were new to me.  In regard to the books, she said that there would probably be a 10th and final novel for Outlander.  She also offered that the all-important print shop scene from the book has yet to be filmed for the series yet. I’m glad she shared this, because Producer Matt B. Roberts’ lovable teasing on Twitter would have us eager fans thinking otherwise!  Diana said although she can’t reveal details regarding the print shop scene planned for filming, we won’t be disappointed. Thank God! Sigh! Can’t wait!  Let’s get on with it! Can you tell I’m just a wee bit excited for this specific book-to-scene adaptation? 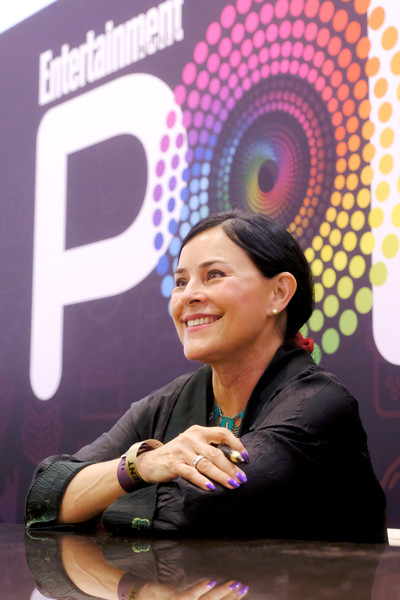 As we sat listening to Diana speak, my thoughts went to how much she gives to her fans as she answers the same questions she has been asked a thousand times before.  I felt she patiently attended to what she has created from the writing of her books and doesn’t find any of us annoying while we spew out our blathering over our love and obsession of her characters and the complex and wonderful world she has created for us in her books.  I also was thinking how fulfilling it is to be a fan of such an intelligent, elegant, and inspiring woman.  Diana is one classy lady!

As the question and answer session was wrapping up, our newfound friend who helped us navigate good seats told us she would dash ahead and save us a place in the book signing line downstairs. True to her word, she made a big show of flagging us down when we came downstairs so everyone would be aware we were with her.  Kim, Uluwehi and I slipped in line with her, each hoping no one would rear up and complain we had cut the line.  Not a word from anyone so I believe it indicates that Outlander fans are nice people. (How refreshing!)  We then began to wind our way, in line, towards Diana Gabaldon, now seated at a tall desk, smiling and patiently signing books and taking pictures with each and every person.  As we got closer and closer, our excitement grew. 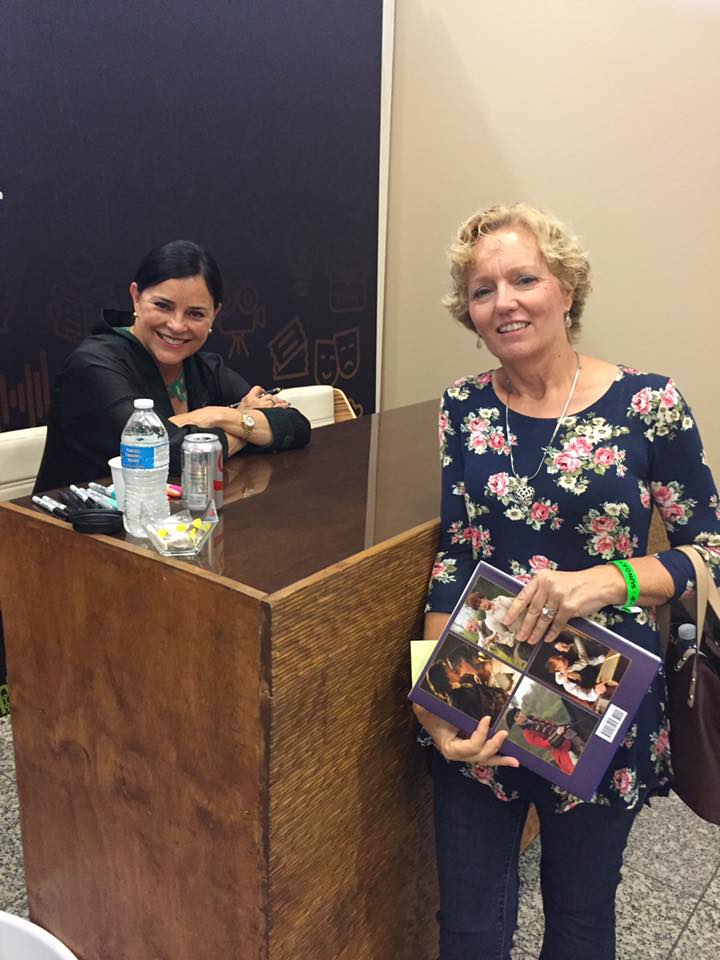 It didn’t take long for the three of us to make it to the front of the line to Diana, phone cameras ready, panic rising up regarding what, if anything, we should say when it became our turns.  First, Uluwehi quietly walked up to Diana, got an autograph, picture and – with dignity – walked on.

Oh my God, as I was walking away from Diana, I wanted to crawl under something!  Holy crap, I had done it again –  never leaving the scene without placing myself as the village idiot!  Alas, though, luck was with me…

Kim went up to Diana after me and, after getting an autograph and picture, she turned back to Diana and said “thank your parents for me.” Hallelujah!  I’ve been replaced as the village idiot!   Sorry, Kim, I am still laughing with relief you took over! 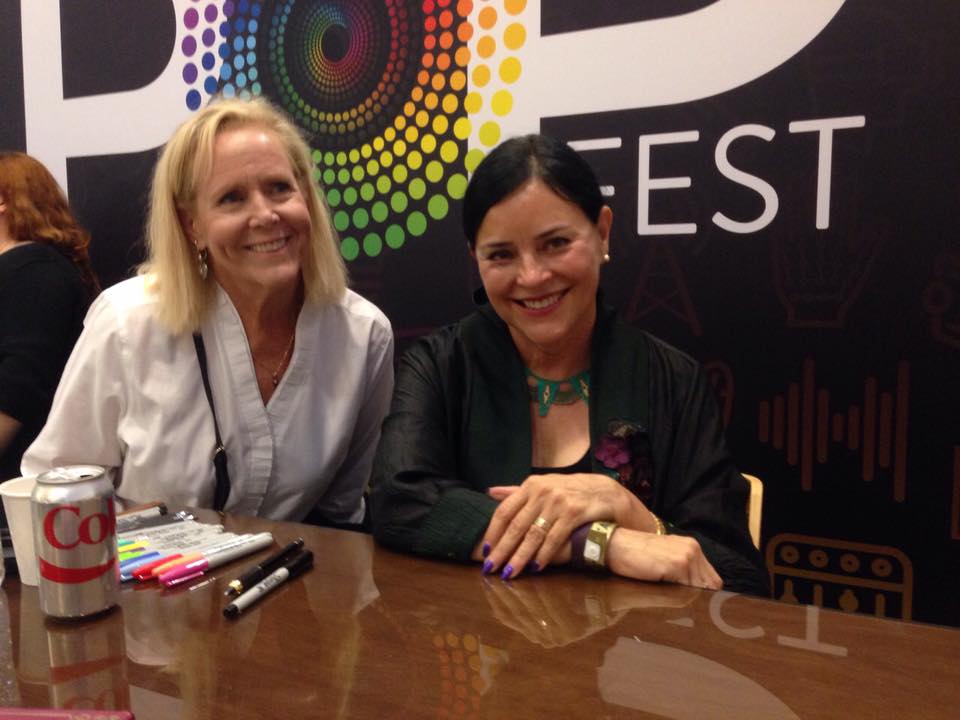 Mission accomplished. A day well spent at the 2016 Entertainment Weekly PopFest – spent time with wonderful friends, met Kim’s lovely husband, got up close and personal (maybe a little too personal) with Diana Gabaldon, learned a couple new things about future Outlander happenings and finished out the evening having a Scottish Ginger Beer with Uluwehi and Kim, my Outlander soul sisters.  Life is good.

As a side note, Kim really isn’t the Village Idiot, after having a wonderful day at the PopFest, I returned my rental car this morning and proceeded to trip in the parking lot and break a toe!  Life is still good, I could have broken my dignity again. 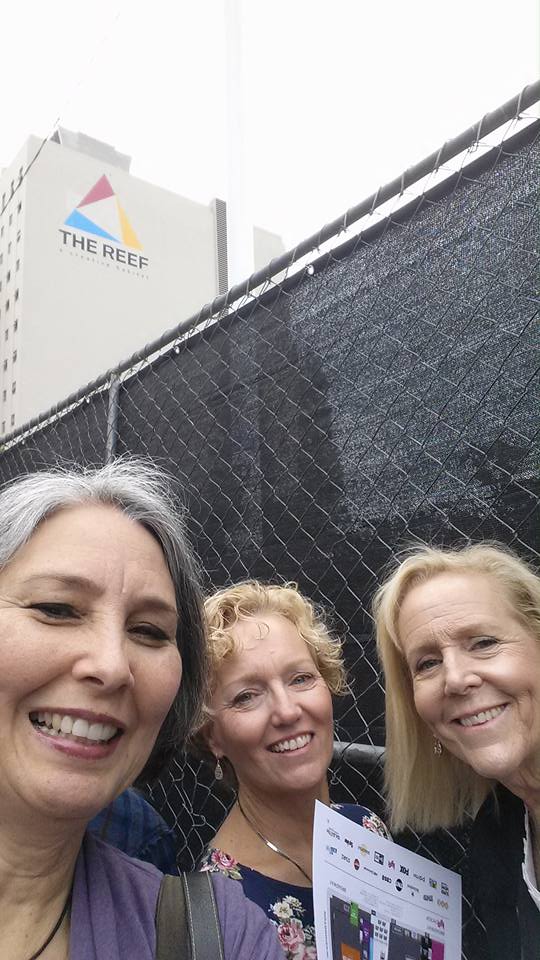 Outlander Cast Blog wants to thank our Special Correspondent, Julie Roberts, and friends Kim Spencer Pena and Uluwehi Pena, for sharing with our readers their Outlander Experience – up close and personal!
Have you ever met Diana Gabaldon?  If so, what did you say to her?