Let’s chat The Handmaid’s Tale episode 2.05 – “Seeds.” An episode that doubles down on mental anguish, and finding the strength of a weed…

I have no idea where to begin this article, so I will just begin with the most striking part; June sitting in a tub of her own blood. Man, oh man – what a shot. Nevermind Not-Safe-For-Work, this is Not-Safe-For-Life, but I’ll remind you what it looked like anyway because I’m just that kind of guy: 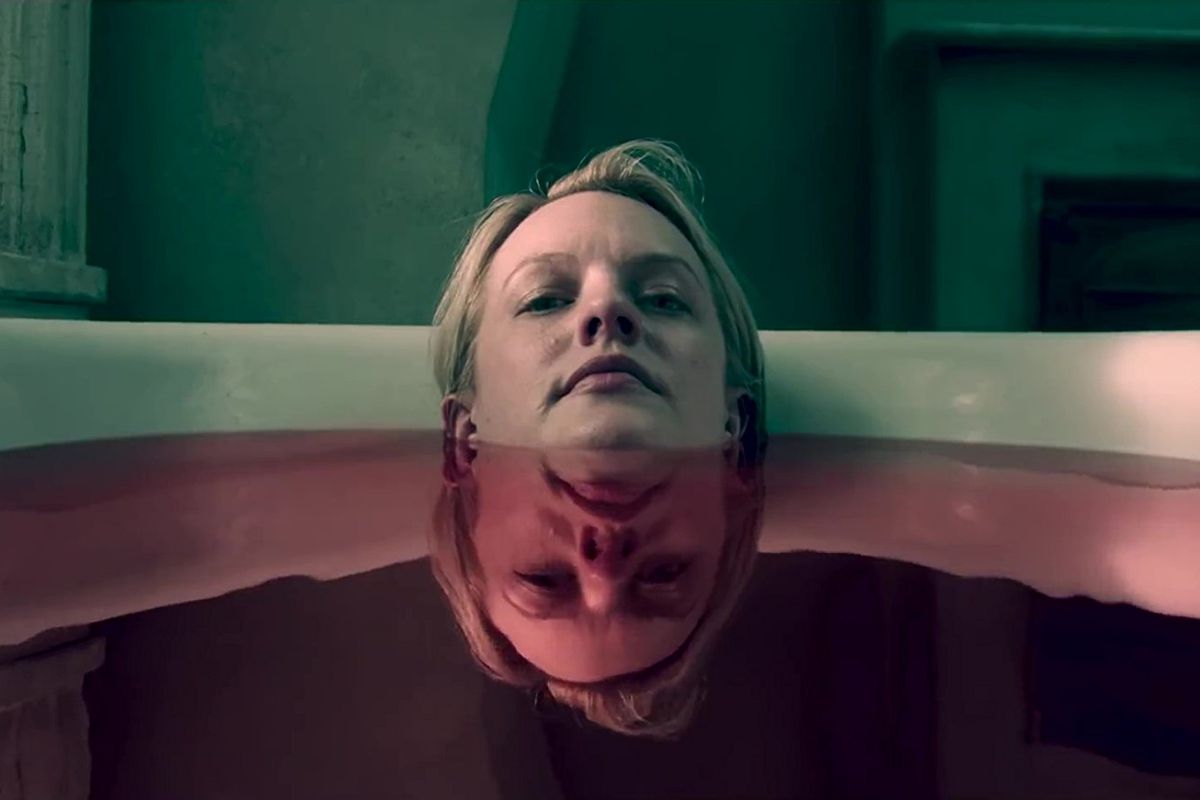 This is one of those shots that goes vastly underappreciated within the visual cornucopia of The Handmaid’s Tale. Everything, and I mean EVERYTHING you need to know about June and Offred is right here in front of you.

A woman caught up to the chin in her own disillusionment and failing self. She looks on with vacant stare in her eyes, stuck between two worlds of action and non-action; all while seeing a hazy version of herself that once was. Offred and June.  Better yet, Offred vs. June.  Too afraid to tell others that she is hemorrhaging, but also too apathetic to really even care. Of course, the irony here is that Aunt Lydia chides Serena for not creating a positive environment for her soon to be born baby, and it’s both Aunt Lydia and Serena who has fostered the volatile environment that pushes Offred to the brink.

Regardless of how she got there, this shot is visual poetry and easily one of my favorite shots from the series so far.

If the last episode was about Offred winning the battle of identities, this episode confirms that there really is no winner. In order for June/Offred to survive, she has to be an amalgam of both. Her unborn child needs to be guided, cared for, loved, and there is no chance of that happening if June is totally June, or totally Offred.

Offred lives, gives birth, and moves on as a dutiful Handmaid. June gives birth in isolation and is later executed once the baby is in good health.

This framing shows the distinct battle between the two personalities, but it also highlights the notion that they have to meet in the middle. June cannot guide her child, and screw over Gilead the way she wants if she’s not alive. Offred, numb and emotionless as she is, operates as an automaton who can barely squeak out more than a few words like “yes, Mrs. Waterford” or “we we’re given good weather today.” There is no value to her child in that kind of existence.

It’s that simple act of “existence” that  sparks June’s personality back into form.  Once she she wakes up in a hospital devoid of any life around her, June talks to her baby (which is apparently now the size of a Papaya?) and declares “I will not let you grow up in this place. I won’t do it. Do you hear me? They do not own you. And they do not own what you will become. Do you hear me? I’m gonna get you out of here. I’m gonna get us outta here. I promise you.”  There ya go – that’s the June we know.  But she’s gotta be alive to make that happen.

So, change is once again coming and that’s a good thing. Just from a viewer perspective, nobody wants to watch Offred succumb to the poison of Gilead – so this shift is a welcome sight. But changes aren’t in store for just June. Nope, there’s a whole Tsunami of forced wedding awkwardness barreling towards Nick and his weird arms.

Seriously though, I can no longer find any superlatives for Gilead that would do it’s horror any justice. Don’t want to promote a loyal employee because it “doesn’t make sense”? Yup, let’s just marry him off to some chick bred for the very purpose of fulfilling marriage vows. Best yet, we’re gonna call it a “Prayvaganza”.

Oh No Oh No Girl GIF from Ohno GIFs

The good news is that on a character level, not only does it give Nick something to finally do, but it actually gives him a real choice going forward. Does he continue to have this tryst with June? Or, does he become a hard working husband who lives at the beck and call of the Waterfords? Time will tell, but something also tells me that he and his child wife are going to have some hard times ahead because he was all too eager to save June and his unborn child.

Another snippet that really creeped me out? When Serena mentions that Nick “looks so handsome.” God, it just feels icky to hear that from her. It’s also an example of how indoctrinated all of the Gileadeans (?) Gileadites (?) as it relates to their social structure. People are proud to make this kind of wedding happen, and it almost seems like and honorary right of passage. Again, terrifying.

I’ve not mentioned everything happening in the colonies yet. That’s because I think it ::checks notes:: sucks. I know Alexis Bledel is giving it her all, and I probably should care about whats happening to she and the Unwomen. But, sadly, I don’t. I mean, on a narrative level.

Sure, we get a nice little wedding scene which is supposed to be an exact mirror of Nick’s forced child wedding and a beautiful send off when Emily fixes the bride’s flowers when she dies the next day. Janine may stand by her hall of fame television statement that “cows don’t get married” and the world deserves a little sunshine, but it doesn’t truly matter to either of the characters we’re watching.

I really do like the imagery used with Janine and the Dandelion. A Dandelion can only spread by losing everything that makes it what a Dandelion is, it’s petals and those little white furry things that fly away. It has to broken down to it’s core, for it to be preserved, let it’s beauty shine and transform into something else. That is exactly what’s happening to this show because it has to reinvent itself now.  It’s telling a larger story, building out it’s world while preserving what makes it great – the June/Offred battle. To that end, this life cycle is also happening within it’s main character of June, and both she, as well as the show, are going to have to evolve to keep the pace and quality it needs. And we gotta get out of from the Colonies. Fast.