A lot of imagery, a lot of plot, a lot of a whole bunch of everything. Wow.

Can you Imagine what that writers room must have been like?

Bruce Miller asking for ideas to break the story and people throwing out random stuff like:

“Nick’s actually a really important general before he met June and never once said anything about it because….reasons!”

Or, “let’s make June like the Terminator and have her say to Serena that she’s never going to stop until both her kids are safe!”

Or best yet, “what if we have Fred say he lost his Lion — cause you know, he’s no longer a real character, or man for that matter. So he should literally hold a toy lion at a fake tea party. Cause, lion, man, lost his manhood? Get it? You get it, right?”

There is, despite how I started this review,  actually some really good stuff in this episode that I quite liked: the scarfs over the Handmaid’s mouths, the look and feel of a totally sanitized and authoritarian Washington D.C.,  the decapitated Abraham Lincoln (although that is a little dramatic), and even the shot of June walking out to a kabillion Handmaids who all kneel when she kneels to pray. But, these are all things. Things that happen, or are looked at. They’re there to say, “oh wow, look at that!” Or, “can you believe that?!”

Spectacle is not bad by the way. It’s actually a good thing. Or, at least, it can be. That is until, however, it supplants story as the main draw for a film or episode of television — as it did so in this case.

The Handmaid’s Tale is, has been, and probably always will be one of the most visually dynamic shows I have ever watched. Seriously – top notch all the way around. But what made THT so special, especially in those first three episodes of the series, was that it tackled the human struggle of being embroiled in a state of existence that was dead set against acknowledging the humanity it was supposed to serve.

Characters interacted with others with genuine emotion (both good and bad.) Those genuine interactions resulted in relationships, those relationships were tested in many ways, and the show continued to evolve around the reality of those relationships. That reality lead to stunning scenes that defined who our characters were on a primal level, and informed them on narrative level that made sense to viewers  but still remained slightly fantastical.

Everyone can related to the struggle of being human. That is our collective story.

While this was the M.O. for the first season, the following two seasons have become more about finding new and improved ways to delight us to the pageantry of Gilead — telling us how awful it is via shocking events or prinstinely executed visuals culminating in the final argument between June and Serena at the foot of headless Abe.

The problem with this approach, however, is that while spectacle can be useful (think the white house blowing up in Independence Day) it can only go so far. You need actual scenes to make the spectacle worth it.  This is the problem that Bruce Miller faces with an episode like “Household” — it’s a bunch of “moments” instead of real scenes.

June standing in front of white wings, seeing the rings in Handmaid’s mouths, walking through a new and improved Union Station, driving up to Commander Winslow’s house, the Washington momument/cross, fighting about freedom at the foot of the President who signed the Emancipation Proclamation, and saved the American union. Yes, it’s all meticulously planned and well shot, but instead of characters making decisions and choices that would seem organic, this episode is saying – “look at how AMAZING we are!”

Scenes vs. moments is a very difficult debate to write about. Technically, everything that goes on camera is a scene in some form or fashion. But, I suppose the big difference between scenes and moments I guess I could amplify is simply this: “moments” feel planned and scenes feel improvisational – like life.

Moments exist to service the bigger picture, whereas scenes propel us into a world of unlimited possibility within the universe we’re watching. In a scene, regardless of how it’s shot, blocked, written, or acted, it feels like the fabric of the story meshes with the reality of our world.

A scene has to feel like it matters, but it also has to give us time to think, allow us to be with the characters,  discover who they are and WHY they are. So that when the moments with the characters happen, it actually feels earned and impactful. Moments serve to get us to the next moment. They come quickly, and leave quickly. In fact, so much happens in this episode that we are BUZZING throughout the whole experience. It moves too quickly to ever sit down and delve into what we’re doing. So, before we know it – one moment is over and we’re onto the next before we can even blink an eye.

I’ve mentioned a lot of moments within this episode already, but I feel like there is only one scene that actually really exists within the entire run time: when June tells Serena that Serena may have changed, but the world that surrounds her is still the same. It’s still the awful place she knew was terrible for Nichole, and just because she held her one time in Canada doesn’t mean she should go against what she knows is best for Nichole. In that moment, anything can be said. Anything can happen. It feels REAL.

Everything else is basically Bruce Miller saying, “Oh, hey! Wow! Look how deep and well shot our show is!”

Do June and Nick have an actual piece of meaningful dialogue together? Who cares?!

Wait, how in the world are Serena and Fred actually finding a common ground to work together? Why are they suddenly in lockstep? Who cares?!

Hold on, Rita is suddenly #TeamSerena and actually backs her up because having a baby is “the only thing [Serena] ever wanted”? WHAT?! Wait a sec… Who cares?!

You get the idea.

Here’s another test. Can you tell me what is happening in this picture? In other words, what it means, what it does to the story, and how it affects the characters WITHOUT using physical descriptions, their names, their jobs, or the plot itself? 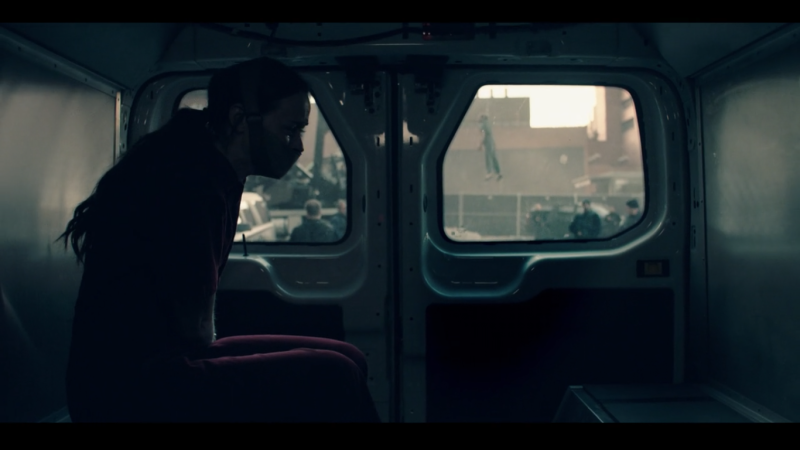 If you can do the same for the next picture below, I will absolutely eat my hat… 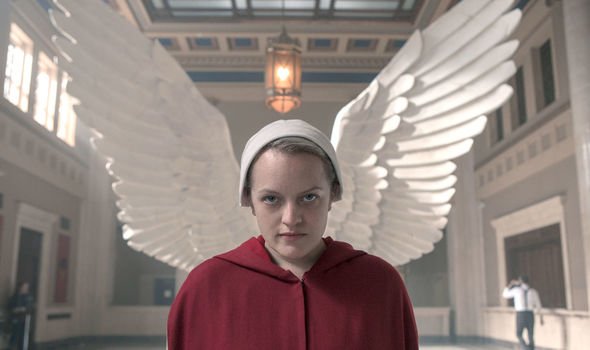 I seriously doubt that you can. And that’s the issue with this episode. Well shot, well crafted, well acted. But all spectacle. No story.