The Handmaid’s Tale: Testimony – Episode 4.08 | I’m Mad As Hell And I’m Not Going To Take This Anymore!

The Handmaid’s Tale has always been in good hands when it pertains to directors – whether it was Mike Barker, Kari Skogland (who recently helmed The Falcon And The Winter Soldier) or my personal favorite, Reed Morano (who also happened to direct one of my favorite episodes of Halt And Catch Fire).  Of course, there are plenty of other uniquely talented directors who have guided this show, but those are the three that jump right off the top of my brain on to paper (er, screen). Elisabeth Moss, however, has set herself up for a special kind of success in her latest efforts to take the directors chair for The Handmaid’s Tale.

As she had done in her previous effort, episode 4.03 “The Crossing”, Moss chooses to focus on the relationships and the specific affect June’s trauma impacts her surroundings. “Why aren’t they more angry?” June asks Moira about her fellow group attendees, because she simply can’t live in a world where we can accept forgiveness for those who robbed her daughter (and her life) so cruelly. As she is wont to do though, June bulldozes the support group with her values and forces Emily to confront Aunt Irene.  Right or wrong makes no difference in June’s mind, because Aunt Irene needs to be confronted – and even put in the center of the circle (much like how the Aunts placed the Handmaid in the center of the circle when she was supposed to be stoned.)

Oddly enough, Moss’ take on how to handle the visual storytelling of The Handmaid’s Tale is actually quite similar to Reed Morano’s style in the first season. The camera is patient, it allows it’s actors to act without fancy cuts or stylized angles, and the use of light throughout the episode adds another layer of storytelling that you may not have caught at first, but your brain did.

Take for example when Luke and June are having dinner together, they simply cannot find a way to communicate with each other.  As such, the scene is washed in dark inky blacks which are desperately held back by three tiny pendant lights.  I mean, we’re not going full Battle of Winterfell here, but it’s honestly hard to see what the characters are doing on screen – especially if you watched it during the day. Since our characters cannot communicate with each other in a healthy manner, they are shrouded in darkness. Or notice the darks blanketing the first therapy session of the episode – that, too, is a group trying to find an identity. As such, they don’t have the benefit of light.

It’s not until June introduces Aunt Irene to the group for her reckoning, or until June arrives at the court to give her testimony against the Waterfords and Gilead that are we finally bathed in light. June, her surroundings, and her relationships, are much clearer.  My favorite scene is watching June sit on the bench as she waits to enter the courtroom. 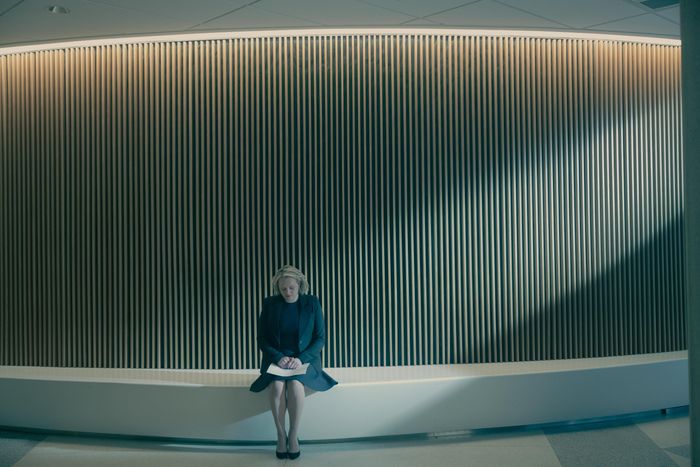 Notice the darkness being held back by a ray of light pouring down on June as if it were God himself showering her with righteousness from the heavens. This visual storytelling is key to how we should feel about June, and her role in a post Gilead world. In fact, this framing is a direct contrast to the eventual defense Fred Waterford raises to legitimize his horrible and inhumane treatment of June while she was his Handmaid. Instead of this ray of light illuminating June, Fred sees his actions as the work of God, and that is why the birth rate in the world has declined except for Gilead – in fact, his acts were so righteous that God gifted he and Serena with a baby of their own.

What does “I am done” mean though? Which June is this? Is this the righteous June who saved 82 children on the “Angels Flight”?  Or is this the go home and rape Luke June? And THAT is why this episode works so well. June is redefining herself with each action, cutting her hair and letting go of the past, trying once again to connect with Luke on a primal level, or forcing the group to confront the trauma in a way she sees fit. Let’s not also forget that the therapy has been run by Moira for however long it has been in existence, but June has seemed to usurp that control once each member of the group votes to stay longer than the allotted hour time frame.

There is a dichotomy being set up for the viewer that envisages June as a saintly figure – one who is bathed in light and bestows clarity with her every choice. Sure, she may have bullied Emily into confronting Aunt Irene, but look at how Aunt Irene’s death made Emily feel — she was happy and felt “amazing”. But this episode has also amplified June’s darker tendencies, despite her willingness to finally tell Luke the truth about the last time she saw Hannah. Her actions and lies are slowly damaging the people who have meant most to her throughout her life. So the show is asking us one simple question – is it ok to be vengeful in response to trauma?

Any good show has a protagonist and an antagonist. A really great show can mix the two. Is Moira right in her assessment that anger is an important tool in healing trauma? Of course she is. But June fires back with, “Why does healing have to be the only goal? Why can’t we be as furious as we feel? Do we have that right?” Is she wrong? No. But is that the appropriate response to trauma? Well, the show is asking you to make that choice. Are you with June, or, are you against the path of mutually assured destruction? For June’s rage and thirst for vengeance can only lead to one outcome – more violence and a longer step away from the moral compass he can hold against Gilead. June is neither good, nor is she bad. She is a character that is damaged, and we have to decide if we want to follow that damaged character.

It’s obvious that Moss, and the creative team, understand this special dichotomy materializing before our eyes because they lean into the idea that Fred’s outburst garners real supporters with actual brains. Like any polarizing trial, or platform, there will always been the visceral haters but also the staunch defenders. This, of course, does hit close to home for us Americans as of late – especially in light of the utterly despicable rush on Capitol Hill by legitimately crazy people. I may not understand why they chose to defile the very seat of democracy in the world, but they do and they did what they did. So, am I surprised to see people pledging support for Fred and Serena in Canada? Nope. Not in the slightest. Crazy people are everywhere, and Canada (unfortunately) is no exception.

What the show is trying to do is tell you that June is not one hundred percent right. Of course Fred and Serena are out of their minds, but they do have some qualities that people in that world are flocking toward. Emily may have driven away from the scene where Aunt Irene hung herself pleased with the outcome (once again rhyming with Reed Morano’s striking visual take as Emily was taken away from her Martha lover being hung). Moira, however, has clearly seen a side of June that she didn’t think was present and that is damaging a foundational aspect of June’s character.

It’s easy to want to be angry and vengeful against Gilead, the Waterfords, or even Aunt Lydia as she once again tries to manipulate a very much alive Janine.  As viewers we can so easily want to lash out and see the comeuppance for these characters. When June dares suggest that they should all be angry, my first reaction was to fall back on the very cliche, but apropos, monologue from Peter Finch’s Howard Beale in The Network.

This clip has surfaced many times throughout history since Finch won best Actor in 1976.  It’s used as a rallying call against whatever oppression people are under, or believe themselves to be under. It’s a wonderful sequence, and Finch won best actor for a reason. For those who can’t watch the clip, here’s the dialogue:

“I don’t have to tell you things are bad. Everybody knows things are bad. It’s a depression. Everybody’s out of work or scared of losing their job. The dollar buys a nickel’s worth. Banks are going bust. Shopkeepers keep a gun under the counter. Punks are running wild in the street and there’s nobody anywhere who seems to know what to do, and there’s no end to it. We know the air is unfit to breathe and our food is unfit to eat, and we sit watching our TVs while some local newscaster tells us that today we had fifteen homicides and sixty-three violent crimes, as if that’s the way it’s supposed to be.

We know things are bad – worse than bad. They’re crazy. It’s like everything everywhere is going crazy, so we don’t go out anymore. We sit in the house, and slowly the world we are living in is getting smaller, and all we say is: ‘Please, at least leave us alone in our living rooms. Let me have my toaster and my TV and my steel-belted radials and I won’t say anything. Just leave us alone.’

Change a few words here and there, and you’ve got a perfect stand in for June’s call to action.

But what history forgets is that Finch’s Beale was a depressed and wildly cynical character. Yes, there was an outburst that caused the reaction he demands in his rage filled monologue, but nothing changed. In fact, his”truth telling” was simply used and exploited by the very network he was raging against to get better ratings and more money.

So, you, the viewer, are you mad as hell? Or, do you think there’s another way of healing? Elisabeth Moss is asking you to choose.

SEE ALL OF OUR COVERAGE OF THE HANDMAID’S TALE HERE